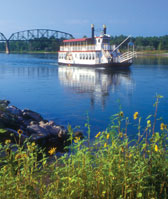 Fall brings a seasonal magic to Bismarck best enjoyed from the Missouri River.

For the greatest view of golden cottonwoods and sandbars-cum-horseshoe courts, opt for a spin on the Lewis & Clark Riverboat. The Governor’s “Tourist Attraction of the Year” for 2006 travels a scenic stretch of the upper Missouri past wild deer, turkeys and sometimes a beaver. Even the park containing the riverboat’s launch site holds some history: a 55-foot, full-scale keelboat that your kids will enjoy exploring. The wooden, masted vessel resembles the one Lewis and Clark used to sail the Missouri.

Take advantage of these attractions and others when the temperate autumn air beckons you for long days outside.

For locals and visitors alike, finding outdoor pursuits during this season comes easily. Boaters and anglers hit the Missouri, while runners, walkers and cyclists appreciate Bismarck’s extensive trail system. Many trails parallel the river, while others wind through town.

“We host the Bismarck marathon and half-marathon in September,” says outdoor enthusiast Melanie Carvell, “and it’s a beautiful course—flat and fast, along the Missouri River bottom just when the leaves are changing color.”

Conclude your afternoon outings with the sun’s evening dip. Meriwether’s Landing, a restaurant situated just steps from the Lewis & Clark Riverboat’s dock, offers the perfect deck from which to see autumn’s long, lazy sunsets. At the Pier at Southport Marina, another choice popular among locals, two-tiered outdoor decks rise above the boulder-lined banks, offering your family a crow’s-nest view of passing boats.

Continue a Bismarck tradition, and take the family to Papa’s Pumpkin Patch. The farm grows more than 30,000 pumpkins, gourds and decorative corn on its 20-acre plot. But the fun isn’t all about produce. Take a hayride or tractor ride for a buck—or a pony ride for $2. The corn mazes alone will keep your family entertained (if not lost) for hours.

Leaf peepers and animal lovers alike will appreciate the Dakota Zoo, on the south side of town in Sertoma Park. The zoo houses the state’s largest collection of animals, with more than 600 birds, reptiles and mammals. Walk the Wilderness Trail to observe native North American species, such as bison, pronghorn antelope, elk, bighorn sheep, moose, and white-tailed and mule deer in environments like those found in North Dakota and across the Rocky Mountain West. At the zoo’s opposite end, visit mountain lions, bobcats, lynx and Alaskan brown bears. Open-air fencing confining these animals might tempt you to step behind the rustic, waist-high barrier to touch these predators as they press against their wire enclosures, but their roars, grunts and snarls remind you that, although captive, these animals remain wild. Rest your legs and still see the animals during a ride on the little green train.

In recent years, the former Folkfest parade merged with the United Tribes International Powwow parade (September 7–10) in a single, colorful Parade of Champions that recognizes the melding of two cultures. “The result is a steady stream of native dancers, marching bands, horseback riders, antique cars and spirited floats,” says Mielke. The September 9 parade runs from the state’s picturesque Capitol grounds through downtown and ends at the popular Kirkwood Mall.

Summer may be giving way to fall, but in the state’s capital, visitors and locals refuse to relinquish their full days outside.