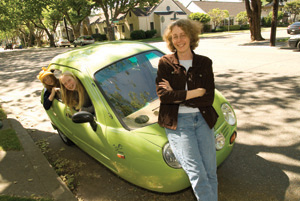 Margaret Starbuck can’t go anywhere without getting a laugh, or a stare or aook of befuddlement. She’s
one of a growing number of motorists who drive electric cars in Alameda. Starbuck bought the four-seater ZAP Zebra from O’Connell Electric a few months back and loves the attention she gets while cruising in her three-wheeled vehicle, which looks more like a bug than a car.
“Driving down the street, it cracks us up. My 13-year-old daughter and I get these double takes,” she says. Starbuck commutes to Berkeley and back at speeds of up to 40 mph (too slow for the freeway) and has almost no fuel costs. “It’s just 50 cents a charge,” she says. “That’s 3 cents a mile.”
Pulmonologist Steve Lowery is another Alamedan who’s leading the charge to go electric—not just to save bucks at the pump, but to save lives. “We see, on a Spare the Air day, more respiratory illnesses in the emergency room,” he says. Lowery feels so strongly about reducing car emissions that he recently convinced his friend, Mike O’Connell, to sell ZAP cars at his Volvo dealership on Webster Street.
O’Connell didn’t have to be asked twice. Like Lowery, he’s a fan of fresh air. “I decided to do this when I looked down in the engine compartment of the ZAP and didn’t get a face full of smoke. I knew electric cars were the wave of the future.”
And when it comes to making waves, Alameda is the perfect town. “It’s an island and an oasis of people,” says ZAP’s Alex Campbell, who sees Alameda as a place with extremely community-conscious residents. And the terrain doesn’t hurt, either. “It’s flat, and electric vehicles have a hard time with hills,” he admits, “but in Alameda, especially with the range of electric cars—it’s perfect.” At 40 miles to a charge, you can go anywhere in town and back. Plus, these cars plug into any 110 outlet. Please contact Ginny Prior for a reprint of the entire article)