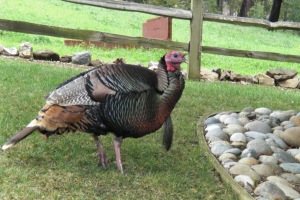 — but I’ve now got an irresistible urge to befriend anything with feathers or fur.

Take the gobbler on Scout Drive in Montclair. He’s become quite a celebrity in the neighborhood, stopping motorists on their way to and from Montara Middle School each day.

What a bold bird. He walks right into traffic and starts pecking on bumpers and eating bugs off car headlights.

Naturally, I’ve tried to reason with him. I found him in Nancy and Pete Klein’s yard, the other day, pecking in the long grass. I quietly approached him and he made a strange noise that sounded more like a wounded dog than a gobble. I understood it to mean he was lonely.

“He’s been ostracized,” said Nancy, meaning the other turkeys in the pack are ignoring him. She finds it as disturbing as I do, and she’s taken him under her wing.

That should be the end of the story. Estranged turkey finds home with human. But I can’t help but wonder why the other birds have cut him off. He’s out of the pecking order and I need to know why.

Sounds like a job for the bird whisperer. I’ll be going back down there this week — to talk a little turkey with the bad boys.

Friendly Skies: Oakland may be broke, but at least you can get free internet at the airport. Imagine my surprise when I turned on my laptop in the Southwest Terminal and found complimentary wifi, where it used to cost money. Now I’ve got something to do while I cool my heels for two hours before my flight.Bold Burglars: The “crime chatter” in the hills, these days, includes word of a car break-in outside the Claremont Hotel and Spa. The thieves took a purse that was under the front seat and then tried to withdraw money from the owner’s bank account. And while that’s not surprising, the crooks went a step further. They took tickets they found in the purse and attended a concert at Yoshi’s.

Freebie Alert: If you’re a fan of folk music (raise your hand if you’re over 50), you won’t want to miss Monday night’s concert at the Montclair Library from 6:30 to 7:30 p.m., Writer Tim Holt comes to town for a musical program on Woody Guthrie and the Great American Folk Song. As we say in Minnesota: Holt is a hoot!

Big Splash: Just when you think you know San Francisco, the folks at Ride the Ducks make a duck boat tour so cheap — it’s almost unbelievable. For $20 bucks ($10 for kids 5-17) you can ride on an amphibious vehicle through the streets of San Francisco, ending the tour with a hysterical plunge into the water at McCovey Cove. The price is good through April Fool’s Day, and I can tell you first hand — the tour is everything its quacked up to be.