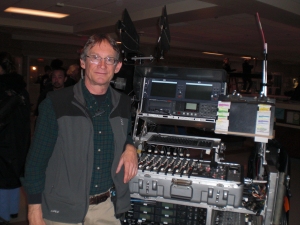 Nelson Stoll on the set of the TV showTrauma

It makes sense that a man who works with noise for a living would also seek out solitude. Nelson Stoll is an award-winning Hollywood sound engineer who’s worked on some of the industry’s biggest films, including the Oscar-nominated Total Recall in 1990. But when he’s not capturing sound on a Hollywood set, he’s in tune with the sweet sounds of nature at his idyllic retreat in the Oakland hills.

“One thing I like about Montclair is, it’s quiet,” Stoll says. “The house I have has about a dozen trees, and there’s a small creek running through the yard. That’s pretty special.”

It’s a far cry from the bustling set of the NBC medical drama Trauma, his current project. Just 15 minutes from home, in a dank World War Two aircraft hanger on Treasure Island, Stoll monitors the microphones at his sound station – a mixer he bought in 1983 for work on David Lynch’s film Dune. “I bought it for $14,000” Stoll says, referring to his Neve music mixing console as if it were his most prized possession. Since then, he’s put another $40,000 into modifications, making the equipment on his cart worth some $200,000.

“I sometimes have nightmares about my equipment,” he shares. “It’s very complex and changes all the time. It takes a huge amount of energy to develop and maintain, which is more suited toward a younger person.” But once the filming begins, Stoll says, his nerves settle down and he enjoys his dream job.

In fact, two of Stoll’s films have been up for Oscars – Total Recall and Dune. They didn’t win, but he says more than just talent is at play when it comes to the Academy Awards. “Dune had the most interesting and complex soundtrack, but Amadeus won that year. It’s very hard to compete against someone like Mozart,” he laughs. In the case of Total Recall, he says, it got trumped by the immensely popular film Dances with Wolves. “It didn’t have a very good soundtrack,” he says, referring to the Kevin Costner epic, “but it caught the peoples’ imagination.”

Stoll has been acutely aware of sounds since childhood. “Growing up,” he says, “I was affected a lot by the emotion of music and the emotional power of sound.” He says part of his training process was to teach himself how to observe the natural world—the way something sounds.

Even at home in Montclair, he hears things that others may miss. “Right now I’m hearing the swings in the background [at the nearby Thornhill Elementary School] and the high-frequency harmonics of the swing hitting the pole,” he says.

As you can imagine, Stoll’s biggest assets are his ears. He takes precautions to ensure they stay healthy – not easy when you work with headphones in noisy environments. “I’m constantly pummeling my ears,” he says, “and I know that’s had an effect.” Stoll says he tries to look at different cultures to see what they’ve done to maintain hearing, and he does what he can to stay fit. “There are a lot of things you can do with nutrition and herbs and ear candles – and keeping your ears clean,” he shares.

So the next time you watch a movie, Stoll suggests focusing on the sound. You may not even be aware of the music or ambient noise – but it’s adding to your enjoyment of the film. “The beauty of sound is we’re not really aware most of the time that it’s affecting us, and that’s why it’s a powerful thing. If you watch a movie without the sound, you’ll see it’s very hard to make any emotional sense, because it’s really the sound that glues it all together and provides a continuum—a heartbeat.”