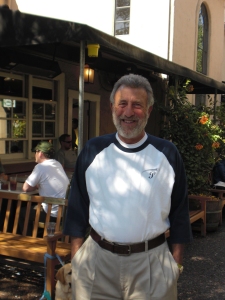 One of the most famous clothiers in America meets me for breakfast, sporting well-worn khakis and a baseball shirt. He’s not apologetic — just honest. “I really never liked it,” he says about the clothing business. Besides, he’s coaching his son’s baseball game later that day and doesn’t have time to change.

That’s George Zimmer, the founder and chief executive officer of The Men’s Wearhouse and longtime resident of Montclair and now Piedmont. In scores of ads over three decades, he’s been “dressed to the nines” pitching men’s suits and tuxes. Yet like most guys, he chooses comfort over style. Only one out of 10 men enjoys buying suits, he tells me. Nine out of 10 think it’s like going to the dentist.

Making the process as painless as possible has been key to Zimmer’s success. He hires people who are more like customers to run his stores, not a bunch of what he calls “clothing mavens.” And not one has an MBA, meaning he doesn’t have a bunch of “suits” running his suit business. For Zimmer, it’s about catering to the average guy, something he learned from his dad, who was himself a clothier.

Zimmer’s first job in the business was back in the ’60s, when he worked in his father’s distribution warehouse. In college, he remembers his dad opening a factory outlet, a place where he offered incredible prices on double-knit sports coats. “My brother was working in one of these outlet stores,” he says, remembering the eye-popping profit they turned.

“He had a brown shopping bag and dumped it out on the table, and it was filled with $20 bills.” The receipts from a day at the outlet amounted to about $20,000. “I saw that and went ‘that’s unbelievable.'” But it wasn’t just the money that made an impression. Zimmer knew at a very young age that he couldn’t work for someone else — that he would have to live his own dream. In 1973, he and his college roommates opened the first Men’s Wearhouse store in Houston, Texas, carrying mostly his father’s polyester sports coats. They kept the day’s receipts in a shoe-box, unable to afford a cash register.

As the business grew, Zimmer turned to television to boost sales. During his first few years on the air, he ad-libbed his commercials, and at one point thought of ending with “and that’s a fact, Jack” — a line from the Bill Murray movie Stripes. But he decided that probably wouldn’t sound good, and one day the words “I guarantee it” just came out. He knew he had a winner.

Today there are more than 1,000 stores and some 17,000 employees, and he still maintains that personal touch. Most of the staff calls him “George” and each November and December he hosts 15 black tie company parties. “I spend as much of the evening as I can, either on the dance floor dancing with employees or taking photographs with employees,” he says. ” I stay till the party ends at 1 in the morning, and I’ve been doing that for 37 years.” Not coincidentally, The Men’s Wearhouse is repeatedly on FORTUNE Magazine’s list of the 100 Best Companies to Work For.

A man of the people doesn’t need to put on airs. Zimmer says he’s reached a point in his life where he no longer needs to dress to impress. “These pants are torn,” he says looking down at his hem. “Of course, I’m coaching a baseball game, but I’m going to work like this first.” It’s become somewhat of an inside joke. Still, he hastens to add that he “cleans up well” when he has to, for black tie events at the Oakland Zoo (a favorite nonprofit) and his kids’ Piedmont Schools. “You make a better impression when you’re nattily attired,” Zimmer says. And like the Men’s Wearhouse commercials, he guarantees it.