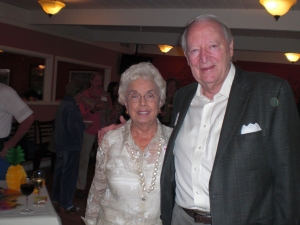 Montclair is losing two of its MVN’s – as in most valuable neighbors. Former City Councilman Dick Spees and his wife, Jean, are moving across the estuary to Alameda. At a going away party thrown by their Piedmont Pines neighbors, Jean told me that last winter’s “freak” snowfall prompted the move. “We went out to check for frozen pipes,” Jean said, “both of us with our canes on the steep hillside, and we looked at each other and said ‘what are we doing?’” They sold their house in one day and are now packing up for the move to a one story home in Alameda. “We’ll actually be closer to downtown,” said Dick, who is a member of several Oakland organizations and just received the Lifetime Achievement Award from the Oakland Chamber of Commerce.

Pinball wizard: Hands down – this is one of the best museums in the Bay Area. It’s the Pacific Pinball Museum at 1510 Webster Street in Alameda. Talk about interactive – for just $15 ($7.50 for kids under 12) you get unlimited play on over 90 pinball machines, many of them rare antiques. Remember the old wood-railed pinball games? They’ve got 15 of them set on free-play so you can get your fill of these beauties. Each pinball game is a time capsule –with a cartoonish, scantily-clad woman beckoning you to play. Great for private parties and corporate events, this is one museum that lets you learn history by playing. It beats the heck out of reading about it in a book!

Boys of summer: Oakland event producer Rich Lieberman hits another homerun with his upcoming tribute to Vida Blue. The Bay Area baseball legend will be honored July 14 from 5 to 8 pm at the eclectic uptown eatery, Ozumo Restaurant and Lounge, 2250 Broadway. Tickets are $50 (available at Ozumo) and guests get to rub elbows with some big names, including Orlando Cepeda, Claudell Washington, and local boxing great Andre Ward.

Around town: What is it about Montclair that makes drivers mistake their brakes for their gas pedals? The latest incident happened a couple of weeks ago when a car almost crashed into the Wells Fargo Bank. Witnesses say the woman’s wheels caught the curb and a nearby pillar, keeping her vehicle from lurching onto the sidewalk.

Fox trot: There’s been a red fox sighting near Harbord Drive on the Piedmont side of Montclair. No, I’m not talking about the comedian – but a handsome red predator with black legs and a bushy tail, according to readers Jay and Heidi Johnson. They wanted me to put out a warning because several neighbors have small dogs and cats, as well as un-caged chickens. Any small pet would make a fine feast for a fox, so it’s best to keep an eye on your animals.

Got news? You can reach Ginny Prior by phone at 510-273-9418, by email at ginnyprior@hotmail.com or on the web at www.ginnyprior.com. Follow Ginny on Twitter at http://twitter.com/ginnyprior.