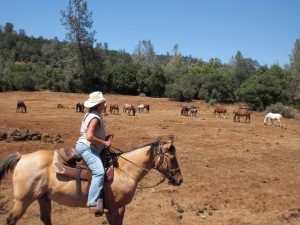 When you think of Northern California, cowboys and cattle drives are probably not the first things that pop into your mind. But there’s a place outside Redding that perfectly captures the romance of the old west. It’s the Wild Horse Sanctuary near Shingletown, about a half hour’s drive from Lassen Volcanic National Park.  Here, on 5000 acres of mountain meadow and forest, 300 wild mustangs roam freely across a rugged land with soaring vistas and sky as big as a Montana sunset. To see these magnificent creatures kick up dust along the ridgeline or graze in the shade of a sprawling oak – is nothing short of spectacular.

My daughter and I rode with the Sanctuary’s co-founder, Dianne Nelson, on a July afternoon when the sun was baking the shimmering landscape.  Our horses picked their way carefully up the rocky hillside to a watering hole where they splashed their muzzles in the cool liquid. We were on our way to an overlook where we hoped to spot a herd of the mustangs in the meadow below.

Nelson started the sanctuary 32 years ago, as a way to preserve history and create a home for what many consider a national treasure. Wild mustangs are typically rounded up by the Bureau of Land Management throughout the west, and then sold at auction. Some are adopted, but Nelson says others are sold and then slaughtered, despite attempts to prevent this practice. The horses at the Wild Horse Sanctuary, however, are allowed to live much as their ancestors did, when California was a vast expanse of rangeland and mustangs migrated freely along millions of acres.

“There they are,” said one of our guides, using binoculars to scan the valley below.  Lean and muscular, the mustangs stood strong against a backdrop of black lava rocks left by the violent eruption of Mount Lassen from 1914-1917 – it’s snow-capped peaks looking much more benign in the distance today.

As we continued to ride, more mustangs appeared, and we got within several hundred feet of the herds. The horses never flinched and we kept a respectful distance, not wanting to disturb them on their land.  Other animals seemed to have the same respect. A mother burro and her babies shared shade several hundred yards from the horses.

The Wild Horse Sanctuary runs on donations, and to that end, they offer two and three day rides, a fall cattle drive and an annual free open house, held this year on August 21. The rides are true western adventures, sans the dried jerky and beans that were staples of the old west. Instead, you get three squares of hearty faire and a cozy cabin on a vernal lake.  No other wild horse rescue offers rides like this, and the chance to be part of a unique wilderness experience. It’s like stepping into a Charles Russell painting. http://www.wildhorsesanctuary.org/

If you go: Take at least one extra day to explore the raw and splendid landscape of Lassen Volcanic National Park (every bit as beautiful as Yellowstone but without the crowds). See boiling sulfur lakes and steaming vents in the shadow of snow-capped Mount Lassen and discover why scientists have erected 1000 antennas on a dry creek bed to search for signs of life in outer space – far from any interference with noise or light. http://www.nps.gov/lavo/index.htm

Weston House view from back deck

For a luxurious overnight stay on either end of your ride, try the Weston House in Shingletown. An architectural masterpiece (built by the grandson of renowned photographer Edward Weston), this five acre bed and breakfast retreat offers panoramic views of Mt. Lassen and the Wild Horse Sanctuary from its desks, gardens and pool. http://www.westonhouse.com/