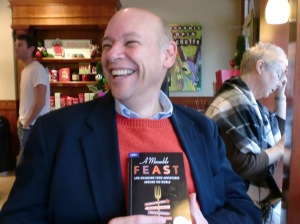 Rooster head soup, slow cooked bat, baked turtle lung, sheep’s eyeballs. If the days after Thanksgiving have you tired of turkey – think outside the roasting pan. There are people around the world, at this very moment, dining on delicacies you never dreamed were – ah – edible.

Piedmont-based travel writer Don George knows better than most. He just finished editing his fourth in a series of books for Lonely Planet called A Moveable Feast. Life-changing Food Adventures Around the World.

It’s a collection of 38 never before published stories from some of the world’s most celebrated travel writers: Simon Winchester, Tim Cahill and Pico Iyer, to name a few.

“Food is something we all share when we travel,” says George. “We all need to eat – but it can become a great cultural lesson.”

Cultural, if not humbling. In Lawrence Millman’s essay A Feast on Fais, he describes how he’s honored by natives who invite him to a ceremonial feast. The main course is Fruit Bat, cooked for hours in an underground oven, fur and all.

Each bite reminds him of something vile. “The ears weren’t bad. Not bad at all. No, they were downright awful. They tasted like they’d never been irrigated or even cleaned,” he writes. The coup de gras was the bat’s reproductive organs, which the tribal elder urged Millman to eat for virility. He does so with great hesitation, only to find that the custom is not as widely-practiced as he was led to believe. “At the end of the ceremony a young warrior comes up to him and says ‘I can’t believe you did that,’” says George.  It’s a bit of irony George finds delicious.

As the Global Travel Editor for Lonely Planet Publications, George has more than a few of his own delectable travel tales. The one he recounts in A Moveable Feast takes place in a small fishing village in Japan, where he finds himself being honored at a ceremonial dinner.

“Then, for a moment, the whole restaurant seemed to pause as a dish was carried regally to the table and set before me,” he writes. “It was a whole fish, arranged with its head and tail twisted to look as if it were still leaping.” What George didn’t realize until he reached into the freshly cut flank with his chopsticks, was the fish was still alive. It literally jumped on the plate each time he touched it. “This was the village’s delicacy: the rawest raw fish in all Japan.”

George describes these moments as either awful or ambrosial – and sometimes both at the same time. “Food nourishes us not only physically, but intellectually, emotionally and spiritually too. It can be a gift that enables a traveler to survive, a doorway into the heart of a tribe or a thread that weaves an indelible tie.”

A Moveable Feast, edited by Don George, is available at a wide range of bookstores including A Great Good Place for Books on LaSalle Avenue in Montclair.