A Minnesota lounge chair - made of ice

They say midlife is a time for self-revelation. Well, I made a doozy of a discovery this week. I do not like warm weather in the middle of winter.

Having grown up in Minnesota, I’ve always felt I was a little different. My friends in California lap up the sunshine and I complain about eye strain. They wear tank tops and I prefer fleece.

Last week I went back to the Midwest and it hit me like a wet snowball. Folks there like winter and are actually giddy about the record amounts of snow that have been falling. Great mounds of white are piled up along city streets and instead of being put out, people are building snow caves and making ice sculptures.

And do they stay in their homes when it hits 20 below? No — they go out in their ice houses, drill holes in the lake and play cards and drink beer while their bobbers float merrily in the chop.

It takes a hearty individual to embrace winter this way — and you have to enjoy wearing wool. But I’ll take chapped lips and rosy cheeks over this wimpy weather we call winter any day. Besides — it makes spring that much sweeter. 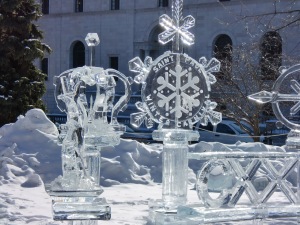 AROUND TOWN: The catwalk comes alive Friday night as local teens Sasha Reynolds, Alice Raschke and friends put on a fashion show at Montclair Rec Center. The 7 p.m. event is sponsored by Magpie, Touch Salon, Gladys Tom and the Montclair Rec Center. Bring your kids and check out the latest fashions and hair styles in this Teen Power social event.

E-MAIL BAG: Thanks to Patti O’Brien Olson for letting me know about the unexpected shutdown of the Jack London Aquatic Club — a place where kids of every ability and income level could be part of a crew team. Olson says the crew members are crushed — they’ve been training since August and the season was just about to start when the board of directors pulled the plug.

CANINE CONFLICT: Neighbors are still on edge after two aggressive pitbulls were returned to their owner last weekend. The dogs were involved in an attack on Mountain Boulevard that killed the beloved pet of an 82-year-old woman, but because no human was harmed, the owner had the right to reclaim them. Reader Rebecca Faiola says the issue is safety. “Her dog was torn to shreds. This is a story about people not feeling safe in Oakland.”

PARTY BOAT: Where do Oakland’s movers and shakers like to meet? Somewhere where they can’t be cornered. One of my moles spotted Gov. Jerry Brown boarding a 100-foot-plus yacht docked outside Miss Pearl’s Jam House recently. At least 15 VIPs were on board, including a handful of security guards who stood watch on the deck. Given the state of California’s economy it was a relief to see that no one was jumping ship.