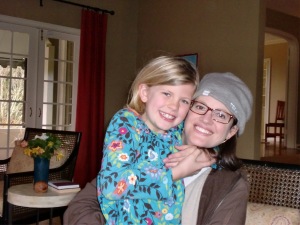 She’s a daughter and mother and author and wife. Piedmont writer Kelly Corrigan has a schedule that makes you marvel at how it all gets done — yet she makes it work.

Sitting in her gracious Piedmont home looking as relaxed as a woman coming out of a weekend yoga retreat, the author of “Lift” and “The Middle Place” talks about life after Oprah (the full page review that O Magazine did on “The Middle Place” in 2008) and her upcoming benefit for Children’s Hospital:

Q: So was it Oprah that put your book on the New York Times best-seller list?

A: I think the biggest thing that opened the door was the YouTube video. I wrote this essay about turning 40 and what I was predicting for myself and my friends for the next 40 years and it’s based largely on what I witnessed growing up with my mom and her girlfriends. That video — I think like five million people saw the video — and that video really made people want to buy the book.

Q: And you’re working on a screenplay now?

A: I finished the screen play — it’s about Fairyland. And I wrote it with my friend, Betsy Barnes. We worked on that for two years. We’ve set it aside for now because I need to work on book three, and I’m getting there — I’m making progress.

Q: But before all this fame, you were a columnist for the Montclarion and Piedmonter. How did your relationship with Children’s Hospital start?

A: The first time I went there was as a photographer. I photographed eight people who had made major contributions to the hospital — and I heard their stories — and, you know, it’s pretty impressive when people make a commitment like that. I think that kind of seeped in — like this is a story I would like told about me one day.

Q: But shortly after the birth of your daughter, your relationship with the hospital became personal.

A: The next thing I knew, my daughter ran a super high fever and had a petechia coming up around her diaper area and a pediatrician who had never seen a case of meningitis before said “You know what? You need to get her to the hospital right now, and go to Children’s — and don’t go anywhere else.”

Q: How did they handle it?

A: We spent three days and three nights, loving the nurses and loving the doctors, and everyone we interacted with from start to finish was a really kind of caring, gentle, competent expert at what they did. I just really internalized those three days. It really changed the way I thought about my kids and their health.

Q: This is the second year for your benefit show called Notes & Words. Why combine authors and musicians?

A: We want to find people who are missing live music who used to go when they were young. So it’s like an intimate book store reading where you’re getting a piece of these authors in a way that you don’t see them in other circumstances — and it’s also just like a regular concert.

Q: It sounds like you’ll have a good time, yourself.

Notes & Words with authors Kelly Corrigan, Michael Lewis and Beth Lisick and musicians Megan Slankard, HYIM and The Family Crest is 8 p.m. April 1 at the Fox Theater in Oakland. Tickets are available at http://notesandwords.org.