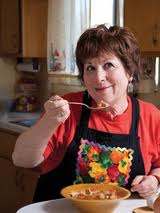 What: She’s an author of two cookbooks and created her own food and wine demonstration business. She’s also a three-time breast cancer survivor whose unsinkable spirit and self-deprecating humor make her an inspiration to others.

When: Orloff-Jones fought bouts with cancer in 1995, 2003 and again in 2008. “The first time I got it, I was shocked, but I always knew that no one had promised me tomorrow.” After her third diagnosis with cancer, she drove to the Army surplus store and bought herself an Israeli commando T-shirt, khakis, toy gun and gun belt and wore the outfit to her chemotherapy sessions. “To me, the commandos are the best warriors; when the Israelis carried out the raid on Entebbe and were successful, I was inspired to fight with the same gusto.” She also had a “Bye, Bye Boobie” party before her mastectomy. The main course was chicken breast.

Where: Orloff-Jones does regular food demonstrations at Alameda Natural Grocery and Encinal Market, as well as other East Bay locations. She’s also been a prosthesis model for Nordstrom clerks who train staff to fit breast cancer survivors with bras and prosthesis.

Why: “I’ve always had a positive attitude — I was just born that way,” she says, adding that it would be a sin not to use her natural talents. Regarding her bucket list, she says being a three-time cancer survivor has pushed her to pursue even more passions.

How:  Orloff-Jones lives in a cozy one-bedroom apartment with her 21-year-old cockatiel, Jose. She supplements Social Security with market demonstrations, gourmet cooking classes and courses in food and wine pairing as well as sales of her cookbooks.