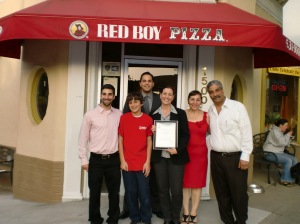 If you want to make dough in the pizza business, it helps to have a hook. For the Oakland hills family who owns the Red Boy Pizza franchise, it begins with the sourdough crust.

“The mother dough was started in Italy in 1942,” says Farid Radwan, an Egyptian-born restaurateur who goes by the name “Fred.” He came to this country in the mid-1970s and fell in love with his Italian wife, Antoinette, when they were going to Cal State Hayward. They married, had children and bought Bordenave’s Bakery in San Rafael in 1996.

The bakery had the famed mother dough and a number of clients, including Red Boy Pizza. When the founders, Peter and Kitty Forstner decided to retire, they sold the business to the Radwans, who thought it would be a fine investment for their three boys. They moved the headquarters to Oakland and opened two more restaurants — one at 4100 Redwood Road and the other at 1500 Leimert Blvd. in a building that had long been vacant.

What a baptism in fire. When the doors opened on Leimert, everyone in the family had to pitch in, even 9-year-old Daniel.

“The first week he was taking orders and swiping cards, says Antoinette. “I asked the customers if he was making the right change and they said he was doing a good job.” Meanwhile, Antoinette, who was born in Italy with the family name Ricucci, buzzed busily from table to table, greeting customers and making sure her boys (including husband Fred) were on task.

And the pizza? There was no doubt it would be a big hit. After all, it had been tested by Antoinette’s father, a proud delicatessen owner from Italy who came to this country not knowing a word of English.

“I’ll tell you if this is good pizza,” he said to his daughter before they opened. Giuseppe took one bite and proclaimed “Pizza Rica!” which, translated, means “the pizza is very rich.” “He thought it was the best pizza he’d ever eaten,” says Antoinette, who honored her father by putting Pizza Giuseppe on the menu. It has roasted red bell peppers, caramelized onions, ricotta cheese and fresh basil and remains a bestseller and tribute to the man who has since died. “He loved to sit in the restaurant and chat with the customers,” says Antoinette. “Everyone in the neighborhood loved him.” Today, with eight franchised restaurants in Marin, Sonoma and Alameda counties, the business is a training ground for the boys. Joseph, 24, is the president of the company and manages the Redwood Road store. James, 23, is the chief operations manager and runs the Leimert location. Young Daniel, now 12, still helps out after school while mom assists with the bookkeeping. They work together to promote Oakland schools and sports teams with donations and fundraisers at their restaurants.

All the while, dad runs the bakery in San Rafael, keeping watch over the mother dough. You might say that for this family-owned pizza business, the mother dough is “the franchise.”