The sky was a palate of lilac and gray when we started our road trip last week from Minneapolis to Atlanta — the Tour d’Heartland as I like to call it.

My daughter and I were taking my mom’s 98 Contour down to her nursing school in Georgia — with thunderstorm warnings along much of the route.

I like a good storm when I’m driving, especially in Iowa, where the landscape is a monotonous monoculture of corn, corporate farms and large ethanol plants. Gone is the patchwork of small family homesteads and neatly kept barns that used to make driving in this state a pleasure.

Just outside Waterloo, the sky started to swell and bruise like a boxer who had been punched relentlessly in the face. Minutes later, the heavens unleashed a thunderous boom and the sky split apart with a sharp shard of light that looked apocalyptic. This show continued for the next several hours as my wipers danced double-time to the sheets of driving rain. You just can’t buy entertainment like that.

By midafternoon the torrent had stopped and we were pulling into “America’s Hometown,” Hannibal, Mo. We were spending the night in Mark Twain’s childhood home as a tribute to the new Forever Stamp being unveiled in his honor. Don’t think it didn’t cross my mind that he would have loved a good weather episode like the one we’d just been through.

“The coldest winter I ever spent was a summer in San Francisco.” Whether Twain said this or not is debatable, but it waspronounced with such authority that I believed I was sitting in front of the man, himself, as he bloviated on about his observations and adventures.

Richard Garey, the actor who’s played Twain for 40 years, was on stage at the 162-year-old Planters Barn Theater the night we arrived. He looked every bit like the author and humorist, sporting a white cotton suit with shocks of silver hair spilling from his well-worn straw hat. Twain’s irreverent humor came out deliciously as Garey shared quips from Twain’s stories and speeches.

“By and by,” somebody shouted, “Who’s ready for the cave?” In “The Adventures of Tom Sawyer” Twain wrote about the scamper uphill to the cave that remains one of Hannibal’s best attractions. It gave me shivers to tour Mark Twain Cave and stand in the spot where hundreds of bats snuffed the flame from Tom and Becky’s candles, leaving them stranded in darkness for three days.

Twain lived in Hannibal from age 4 to 18 and the town inspired his best-known works. Both “The Adventures of Tom Sawyer” and “Adventures of Huckleberry Finn”are published in more than 60 languages and Hannibal draws more than 300,000 annual visitors from outside the U.S.

Twain’s boyhood home and museum (including eight historic buildings) stand proudly in the center of town, just steps from the rambling Mississippi River and a vibrant Main Street graced with family-owned shops. We had some of the best local barbecue and homemade pie ever at Ole Planters Restaurant, a general store in Twain’s day. The town band played music on the sidewalk outside as Tom and Becky look-a-likes strolled hand in hand. 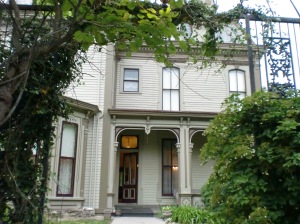 Total immersion in all things Twain produced interesting dreams that night. We were staying at the Garth Woodside Mansion, an 1871 Second Empire home where the author used to stay when he’d visit old classmates John and Helen Kercheval Garth. Surrounded by antiques (including an 1869 Steinway piano that guests are invited to play) and with Twain’s room just across the hall, I felt a kindred spirit with the man and his town. And in my dream, I was down by the banks of a lazy river, with a fishing pole in one hand and a Twain classic in the other.

For more on Hannibal, go to www.VisitHannibal.com. For photos and video of Hannibal, see my website below.