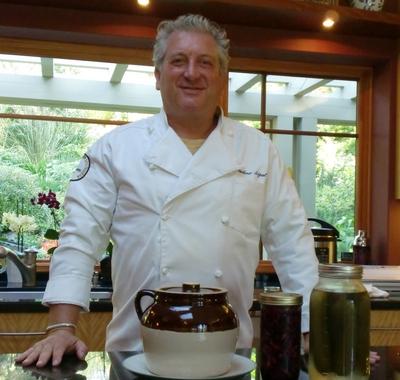 Culinary historian Andrew Sigal shows some of his garden treats, including homemade sauerkraut and pickles.

We’ve all heard the saying, you are what you eat. But how true is this philosophy, attributed to Jean Anthelme Brillat-Savarin?

The man with the answer is Oakland culinary historian Andrew Sigal, who says. “I eat pork, you don’t. I don’t eat meat on Friday, you do. I eat insects, you don’t … these things are very important to our identity.”

In fact Sigal, who started one of the earliest food and travel blogs back in 1999 after a successful career as a software engineer, sees his collection of cookbooks as a portal into the lives of ordinary women, going back centuries.

With a serving of Alegria (Spanish for joy) made with popped amaranth and honey, he gently slips several prized cookbooks out of their sleeves.

“This is a great book — a reproduction — ‘What Mrs. Fisher Knows about Old Southern Cooking,’ ” he says as if he’s a storyteller setting the scene. Abby Fisher was a Southern slave who moved to Oakland after emancipation. She was famous for her pickles and jams, and a group of her Caucasian women friends transcribed her recipes into a cookbook. “It is one of the first African American cookbooks — 1881,” he says, adding “she listed all the women who helped her, which is also a fascinating little piece of documentation in itself because they don’t have first names. It was a period of time when women didn’t do that.”

While Sigal admits he’s no expert on women’s studies, he finds cookbooks to be historically significant.

If a cookbook is stained, it’s even more tantalizing. Sigal tenderly opens the White Ribbon Cookbook, produced by the Orono Women’s Christian Temperance Movement. “It’s wonderful because it’s so dirty. It was used,” he said. “It was loved by someone. It was in the kitchen getting spilled on all the time.”

And notations in the margin? Call them frosting on the cake. “These are the cookies that my grandmother loved — it was the only thing she’d eat after grandpa died of consumption. This is the cough syrup that worked so well when Billy had whooping cough.” Sigal says they’re clues into what was going on in the home at the time.

Even the fragrant plate of amaranth has a story, dating back to Mesoamerica, before the arrival of the Spanish. “It was so important that they would pop it and mix it with honey or some kind of sticky stuff and a flavoring, and make it into idols for certain celebrations,” he says. After the celebration, the people would eat it to symbolize the blood and bones of the god they were celebrating. “The Spanish couldn’t have that so they banned it, completely removing this important food source from people’s diets.”

With the world as his oyster, Sigal admits he has too many interests and not enough time. His home is a designer’s dream and his bountiful garden was featured in May in the Montclarion. He brines his own cucumbers and grows his own corn and spent three weeks purging his garden snails with cornmeal so they could be the “guests of honor” at a recent escargot dinner.

With his many talents and varied tastes, one can only conclude that if you are what you eat, this must be the most interesting man in the world.