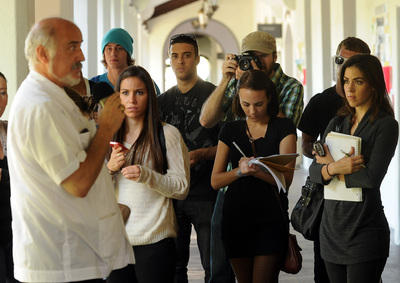 Brother Michael Meister knows where all the bodies are buried — and at Halloween, that’s a good thing.

The Saint Mary’s College theology and religious studies professor has lived on the bucolic Moraga campus for 30 years and is known as the resident storyteller. Things that go bump in the night are his specialty at this time of year.

“I tell all the stories as though they’re God’s holy truth!” he says with a grin, adding that a little embellishment adds strength to the stories, all of which have threads of truth. The ghostly tours are for Saint Mary’s students only.

On a brisk autumn day, Meister takes a group of journalism students out for his “haunted” tour. They’ve got cameras and note pads to document the stories, and Meister feeds off their enthusiasm.

The first stop is the Le Fevre Theatre, where the ghost of a young actress named Amelia resides.

“She was killed in a head-on accident with her parents on her way to opening night,” says Meister, who calls Amelia a benign spirit who doesn’t damage anything — she just likes to let people know she’s there. “She cries, she moans, she laughs, she giggles, she moves props, she changes light settings, she turns lights on and off, she adjusts the volume on microphones.”

Drama majors who’ve been on the tour readily agree with his accounts.

A tragic accident took the life of another resident spirit at Saint Mary’s — Brother Kyran Aviani. In the 1960s, he was killed in a head-on accident with a Highway Patrol officer who was driving the wrong way on the freeway in San Rafael.

“It was very tragic for the college,” says Meister. “He was beloved by the students and was a terrific teacher and a wonderful brother.”

Kyran was also an accomplished artist, and on the anniversary of his death the Hearst Art Gallery staff came to work and all of his paintings were hung in the gallery.

“No one knows who did that,” says Meister, who adds that everything previously on the walls was removed — replaced by Kyran’s work.

But perhaps the spirit of Saint Mary’s can best be embodied by the ghost of Edward Patrick “Slip” Madigan, the legendary coach of the Gael’s football, baseball and basketball teams in the 1920s and ’30s.

Slip’s story begins with a major remodeling project in the administration offices, where the door to the huge safe had to be removed during construction. When crews returned the following morning, the door was back on and locked, and none of the combinations on record would work.

“An old brother, just as a joke, said, ‘Do you remember during the glory days of football? There were only two people who had the combination to the safe — one was the president, Brother Albert, and the other was Slip Madigan,’ ” says Meister. Madigan’s combination worked.

The students crisscross the campus, shooting photos and video and jotting down details. There’s the tale of the phantom student who lived in Aquinas Hall, the story of the cow that died after being herded up the stairs of Augustine Hall, and the legend of Lake La Salle, a fresh water lake with a murky black bottom that has long since dried up behind Assumption Hall.

“Students were forbidden from going out on the lake,” says Meister, “but in the late ’50s or early ’60s, three football players got into a boat and went skinny dipping — and only two came back.”

Legend has it that years later, when a drain pipe in the lake backed up, a skeletal arm and hand were found inside. On the bones of the ring finger was a college ring with the missing football player’s initials inscribed on the inside.

Meister never tires of telling the tales, and he lets the students decide which stories to believe. But for a Lasallian who has devoted his life to the Catholic Church and to teaching, he clearly gets a kick out of story telling.

“What fun it is to tell these big whoppers,” he says, with his tongue planted firmly in cheek.