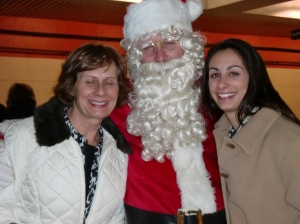 I close my eyes and make a wish with Santa……….

It’s still three weeks till Christmas, and there’ve already been hundreds of Santa sightings. I’ve seen him in department stores and minimalls and at numerous holiday soirees.

He was even at the Montclair Village Holiday Stroll, surrounded by wide-eyed children waiting patiently to meet with the big guy.

How does he do it? Until today, I hadn’t a clue. Then a neighbor gave me the answer: Santa clones himself at Christmas. She saw eight jolly fat men at the airport the other day, and I spotted two more on BART. Santa truly is ubiquitous, the envy of all of us as we try to fit in as many parties and concerts as we can this holiday season.

AROUND TOWN: Montclair Estates is calling it quits after 16 years in the Village. The loss of the neighboring hardware store, coupled with the fact that a nonretail business is moving next door (Golden State Fitness) is reportedly the last straw. The consignment shop is moving to what they hope will be a lively new location, 4268 Piedmont Ave. We’ll miss you in Montclair, just as we miss Montclair Hardware.

On the flip side, the darling new Daisy’s is doing brisk business at 6122 LaSalle Ave. in Montclair. It’s Barbara Mooney’s second East Bay store, with her Alameda shop being named one of the 50 Retail Stars of 2010 in Home Accents Today. The home furnishings and accessories shop is full of sensual holiday scents and gifts.

And Farmstead(6218 La Salle Ave.) has a tasty little offering Friday from 5:30 to 7:30 p.m. For a $10 donation to our local schools, you can taste eight delicious wines, paired with outstanding cheeses at their Montclair shop.

BAUBLES ON BOUGHS: A neighborhood Christmas tree is emerging in Crocker Highlands for the second year in a row. Eight-year-old Francesca Bauldry started the tradition last December by putting a box of ornaments under the tree at Mandana and Paloma. “We loved the response last year and saw many families taking photographs in front of the redwood tree,” says Francesca’s mom, Mona. They hope their tree inspires folks in other neighborhoods to start their own tree traditions.

JOYFUL SOUNDS: Talk about good will — The Ascension Cathedral is loaning its church for a benefit holiday concert tonight for the Oakland School for the Arts. Everyone is invited to the 7 p.m. event, which will feature a number of East Bay choirs. Tickets are $10 (adults) and $5 (students) at the door.

BROADCAST PIONEER: One of Oakland’s earliest television engineers has passed away. Pete Felice was reader Erik Hoffman’s uncle, and he worked at KTVU for almost three decades, many of them as chief engineer. Felice worked on the Betty White show, a science show with Dave Garroway and he made the robot and most of the set for the Captain Satellite show.

ALL AN ACT: On the subject of television, reader Rebecca Faiola says her role as a sleazy biker mom on Investigation Discovery Channel last week does NOT reflect her true personality. The entertainer spent a day smoking herbal cigarettes and drinking fake bourbon for her colorful scene — a nice diversion from her real life as a wife, mom and businesswoman.