Travel takes on a different purpose for those of us approaching our “golden years.” We size up a destination with retirement in mind, asking ourselves what it would be like to live somewhere other than here.

In the last several years, I’ve known neighbors who’ve moved to Nashville, Tenn., Pittsburgh and even Mexico. There is life beyond the Bay Area.

On a recent trip to the Midwest, I met Jeremy Popelka and Stephanie Trenchard, two glass sculptors who left Rockridge in 1998 to raise their family in Sturgeon Bay, Wis. — population 9,000.

“It was so expensive with our preschool and day care — and to be artists,” says Trenchard of their Oakland hills home of 12 years.

On the other hand, Wisconsin offers assistance for artists and a strong tourism trade in Sturgeon Bay and surrounding Door County. And there are similarities to the Bay Area, with bridges and parkland and the dramatic setting of the waves crashing onto the rocks. Door County boasts 300 miles of shoreline, 11 lighthouses and five state parks.

Think of this region as the protruding thumb to Wisconsin’s left mitten. On the west side of the peninsula is wide-mouthed Green Bay and on the east is Lake Michigan. Four hours from Chicago, it’s a land of gentle terrain and small family farms, dotted with silos and barns. White chapels lace the landscape, and cherry orchards ramble along the roadside. So do the cows, who seem to know their importance in a statewhere sports fans are called Cheeseheads.

“There’s strong support for artists here,” says Trenchard, who, along with her husband, runs Popelka Trenchard Glass Fine Art Gallery & Studio. They are both nationally known glass artists who work in a complex that once housed a factory for military mine sweepers.

Down the road in Fish Creek, a whole farm has been turned into a do-it-yourself art experience where visitors can drop in and throw pots, weld metal and work with glass and other “sexy” materials. The Hands On Art Studio takes up several barns and outbuildings on land owned by an art teacher and her tool-savvy husband. This is a family-friendly place that also serves beer to get the creative juices flowing among the adult set.

An old-fashioned spirit of cooperation makes Door County seem, in some ways, frozen in time. And frozen doesn’t begin to describe the nippy conditions in winter, when locals celebrate their Scandinavian heritage by taking the Polar Bear plunge. Others don parkas and ear muffs for a day in their ice fishing shanties. Some huts are quite comfy with curtains on the windows and Naugahyde car seats for benches. And Green Bay has such clarity, you can actually see the fish swimming through holes that turn ice into Swiss cheese in winter.

The number-one catch here is whitefish, which is used in traditional fish boils that go back to the early Scandinavian settlers. 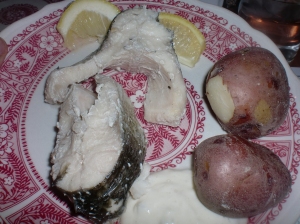 Places like the famed White Gull Inn cook up meaty pieces of whitefish in a roiling kettle of water that hangs over a spectacular backyard bonfire. Potatoes are added in a second pot, and, at just the right moment, kerosene is splashed on the flames to make the water boil over — eliminating the grease from the oily fish.

The White Gull Inn has also been awarded for having the best breakfast in the country by “Good Morning America.” Their homemade cherry-stuffed French toast leaves you speechless and wondering how you can pack a party tray to take home.

Yes, Wisconsin is known for its food production, but Door County has a sophistication that goes beyond cheese curds and beer. It’s a place with a strong sense of heritage and pride. It’s a welcoming place for visitors and, I imagine, a nice place to call home.