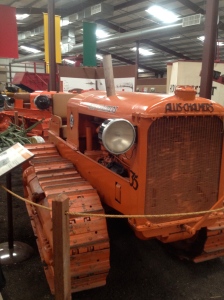 “She thinks my tractor’s sexy”

I admit it: John Deer tractors turn me on.

I was sharing this tidbit with a Yolo County grower, the other day — a bit like preaching to the choir since 94 percent of Yolo is agriculture.

“There’s something kind of sexy about farm implements,” I told him. “You know, the circular blades tilling the land and the leafy greens springing up from the soil. It’s Americana. It’s romantic.”

In many parts of the country, farming is a lost art. But in Yolo it’s hot again, especially with the farm-to-table movement that’s drawing young people back to the land.

“You have this whole group of kids in their late 20s who have come back to their rural communities which, in America, is really unusual,” said Lisa Gaynes, a longtime resident of the agricultural town of Winters, about 25 miles west of Sacramento. It’s a small town with big dreams when it comes to tourism.

“Winters wants to be the next Yountville,” said Ken Shaw, co-owner of England-Shaw Vineyards, one of many grape growers in a region that has UC Davis as its agricultural centerpiece.

On a warm Winters day in early May (a delicious irony) the townsfolk were tasting the fruits of the land in a town square event called Roots to Wine. Gio Ferrendelli held out a glass of his crisp sauvignon blanc with hints of green apple and tangerine, and I eagerly accepted.

Route 3 Wines all the way from Woodland to Winters,” I asked?

“Winters makes sense because it’s a converging area,” said Ferrendelli. “It’s a destination on weekends for folks coming from Sacramento, the East Bay and Davis.”

It’s wines like this that are rapidly putting Winters on the map. But so is a guy named Guy Fiere, who featured Winters’ popular Putah Creek Café on his TV show “Diners, Drive-ins and Dives” recently. The flamboyant foodie went nuts over Putah Creek’s fire-roasted chickens and savory cioppino, the creation of Chef Fred Reyes. Weekend nights have the place packed as a massive outdoor brick oven turns out perfect pizzas like the one with prosciutto and basil every three minutes.

Putah Creek’s sister restaurant is across the street — the venerable Buckhorn Steakhouse. On the next block is the Turkovich Family Wines tasting room and the Winters Cheese Company, two endeavors owned by young brothers who grew up in the area. Chris is the winemaker, and Danny is the cheesemaker.

“An evening in Winters can include dinner at Putah Creek or Buckhorn or Preserve, an outing at the wine tasting rooms, then a visit to the gallery and then the Palms,” said Gaynes. The Palms is the century-old opera house that hosts bands (Commander Cody, Country Joe and more) passing through on their way to and from the Bay Area.

The night I was there, I capped off the day with a wine and truffle tasting at Root Stock, a tasting room and gift shop that features the bounty of local food products in Yolo County. As the heady scent of wine and chocolate seduced me, I had what writers call an epiphany.

“Yolo is an acronym for “you only live once” said the woman sitting next to me. “Now that’s a romantic notion,” I replied. And all the way home, past the fields and the farm implements, I thought about this region’s love affair with food. Sexy, indeed.

What are your favorite local adventures? Drop me a line, and I’ll share them with read- ers. You can reach me at gin- nyprior@hotmail.com or on- line at www.ginnyprior.com.