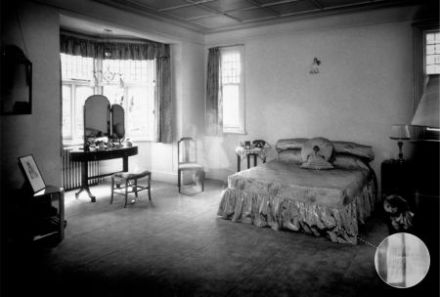 The ratio of humans to ghosts is unknown. That’s probably a good thing, knowing how spirits can violate one’s personal space.

Yet, this is the season to seek out these elusive beings. Cemeteries aside, there is no better place to meet up with a ghost than a historic hotel. Here are five California favorites:

1. Napa River Inn. What ghost wouldn’t want to live in wine country? This elegant Michelin-rated hotel was once a brick grain mill along the bustling Napa River. Built in 1884 by Capt. Albert Hatt, there have been so many sightings of spirits in this building, it’s been featured on the Travel Channel program “Haunted Hotels.” The stories are fueled by the real-life suicide of Capt. Hatt’s son, who hanged himself from a beam in the warehouse in 1912.

2. The Hotel La Rose in Santa Rosa. L ocated in historic Railroad Square, l egend has it a prominent citizen was nearly tarred and feathered for trying to shut down the hotel’s bar during Prohibition. Italian stonemasons built this in 1907 and it still has the original wainscoting in the corridors and a handsome lobby staircase from the San Francisco Cable Car Barn.

3. The Berkeley City Club. This 1929 Julia Morgan classic was the collective vision of 4,000 women who worked with the talented architect. Whether some of them wander the halls of this Romanesque sanctuary is pure spook-ulation — but the castle-like feel certainly connects you with the past.

4. Inn at the Presidio in SanFrancisco. Is that fog, or the clammy fingers of a thousand soldiers who’ve died on this old army base? Built in 1903 and opened this spring, this classic revival brick building is the first hotel to open in the 1,500-acre national park. The inn sits alongside the oldest buildings in San Francisco, including the Officers Club, in existence since 1776 and controlled by three nations.

5. The Queen Mary in Long Beach. This legendary lady saw many an untimely death in her days as a grand ocean liner. A few wealthy guests have refused to leave, like the specter whose moans can be heard in the echoing chambers of the ship’s old swimming pool — long since dry. This is the 76th anniversary of the Queen Mary’s maiden transatlantic voyage and its apparitions are honored with an annual event called Dark Harbor, which boasts 225 monsters and 80-foot flames.

Each one of these legendary listings belongs to Historic Hotels of America, a collection of more than 110 inns, hotels and boutique properties across the United States. You’ll recognize others as well, including San Francisco’s Omni, The Fairmont, The Mark Hopkins, Hotel Whitcomb and the Palace Hotel. Unlike the song “Hotel California,” you can check in any time you’d like — but you may not want to leave.

Many of the hotels in this group have ghostly getaway packages and fall offerings. See http://www.historichotels.org.