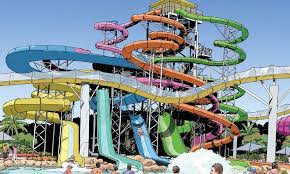 As we prepare to celebrate summer, let’s pay homage to the sultan of splash, Herbert Sellner. This Minnesota inventor came up with the water slide in 1923, the most exciting way ever to enter the H2O.

My affair with aquatics goes back to my childhood in Minnesota, which — for the record — has 12,000 lakes, not 10,000. With that many watering holes, we got pretty creative with our splashdown. We used rope swings and slides, even bridges and cliffs as our jumping off point.

It’s not surprising that Minnesota is home to the country’s tallest indoor water park — Water Park of America. It’s a maze of pipes and pools that slosh you around like a sock in the washer. The park is so large that some slides have to start outdoors and work their way in — making the outside of the building look like Medusa. The day I was there I lost 10 pounds running up ramps and sliding down tubes at a frantic pace. It made me feel young again, until I tried the Flow Rider Surf Simulator and was tossed to the side of the wave pool like a crumpled-up Kleenex. There’s a skill to surfing on a thin sheet of water, and a person who bruises easily should stick to the ocean.

Still, landlocked resorts don’t have an ocean. They use things like wave simulators instead. My first experience with a fake wave was in college, at an attraction that’s still around today. Big Surf in Tempe, Ariz., has been operating so long that it should be listed under the definition of “oasis.” It’s also where I lost my first swim top. Bodysurfing in my bikini, I underestimated the force of the wave as it crashed onto shore. I won’t go into details but suffice it to say that I’ve been wearing a wetsuit ever since.

The granddaddy of all water park towns is the Wisconsin Dells. With 20 water resorts in the area, it’s earned the distinction of “The Waterpark Capital of the World.” Maybe it’s the harsh winters (they’re home to the nation’s first indoor water park), or the fact that the Wisconsin River winds its way like a great serpent through the center of town, but people here are crazy for water sports. The Dells was the first area to use World War II amphibious vehicles, Duck Boats, for recreation. They were brought here in 1946, letting visitors rumble through the streets and into the water seamlessly.

Across the pond, as they say, it’s Europe that holds the record for world’s tallest waterslide. The $26 million Divertical water coaster in Italy (a 197-foot drop at 65 mph) trumps Brazil’s Insano waterslide, which was once the tallest at 135 feet. Both these chutes are on my bucket list. But not before I get a new wetsuit.