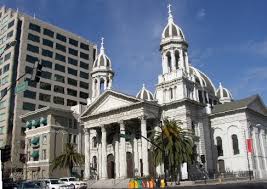 One of the Bay Area’s best bargain destinations is San Jose. Dionne Warwick’s smash single put this town on the map in 1968, but these days it’s the tech industry that’s fueling the renaissance.

What does this mean for the savvy traveler? Low weekend rates at upscale hotels like the Fairmont, where you can walk to dozens of museums, trendy cafes, live music venues and cultural events.

It was a weekend board retreat that brought 12 of us to the Fairmont — not exactly big conference business for this 808-room hotel. But you’d have thought we were Google — or Microsoft — the way we were treated. Luxurious rooms, (as low as $99 on weekend nights), a spa, rooftop pool and a rocking lobby bar with live music made this weekend successful. Our board bonded like Gorilla glue. This is how business gets done in the 21st century.

San Jose is the 10th largest city in America — hard to imagine with such a walkable downtown. Overlooking the fountains at Plaza de Cesar Chavez, our neighbors were the San Jose Museum of Art (housed in a landmark 19th century post office) and The Tech Museum of Innovation (132,000 square feet of hands-on science and technology).

We walked to the ballet at the San Jose Center for Performing Arts. We relaxed to live jazz at the art deco Hedley Club Lounge in the Hotel De Anza. And we went totally nuts as the San Jose Sharks skated through double overtime at SAP Center. They lost to the Washington Capitals, but fans still had plenty to celebrate. The Sharks are a perennial playoff team and a huge draw for downtown San Jose.

San Jose bills itself as an ideal Bay Area destination. More temperate than San Francisco (300-plus mild, sunny days a year), it’s a short drive to beaches, wine regions and Monterey. But I’m betting you’ll find — as we did — that your car stays parked in the hotel garage. San Jose’s downtown hub has too much to offer. The siren call has never been more alluring.

What are your favorite local adventures? Drop me a line, and I’ll share them with readers. You can reach me at ginnyprior@hotmail.com or online at www.ginnyprior.com.

Find hotel, dining and event options at http://www.sanjose.org.
The Fairmont Hotel has stay and play weekend packages at http://www.fairmont.com/san-jose/activities-services.