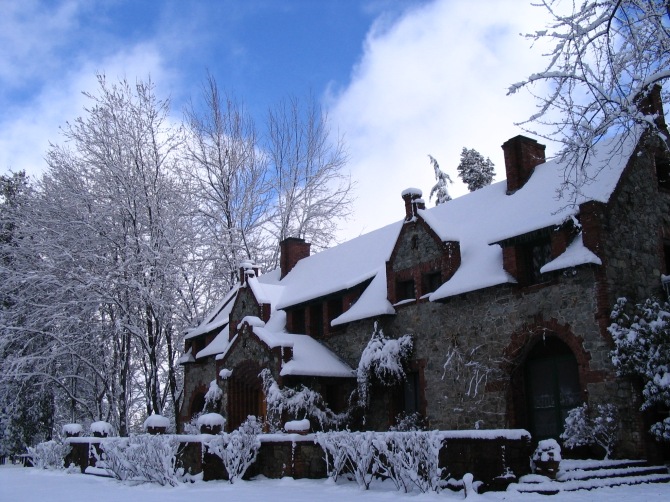 A snow covered Empire Mine

All that glitters is not gold. Some of it comes from the twinkling lights heralding Christmas in California’s Gold Country.

It was a shop owner who first spread the word that James Marshall had struck gold in the Sierra foothills.

San Francisco literally emptied overnight. And in 1849, when President James Polk confirmed the rumor, it triggered a mass migration that saw 90,000 people come to Gold Country in the first year.

What a cross section of humanity. Enterprising and eclectic, they paved the way for what you find today in Grass Valley and neighboring Nevada City — a strong sense of community and celebration of preservation.

Take the Holbrooke Hotel in Grass Valley. A tunnel from Empire Mine led to the bar at this boomtown hotel, where a miner could tie up his mule, turn his gold into cash and down a whiskey or three in the saloon.

Today, the Holbrook and most of downtown Grass Valley are on the National Register of Historic Places. Likewise with Nevada City, where the Victorian downtown is so perfectly preserved.

Hallmark made a movie here called “The Christmas Card.” In 2005, folks came together to support the production, using Nevada City’s diner, hotel, church and even fellow citizens as supporting artists.

The twin towns are known for their music and live theater — art forms on steroids during the holidays.

Downtown Nevada City holds its Victorian Christmas on Wednesday nights and Sunday afternoons through Dec. 21, where costumed carolers stroll along gas lamp-lit streets as the aroma of roasted chestnuts fills the air.

And since many mine workers were of Cornish descent, Grass Valley hosts an authentic Cornish Christmas on Friday and Dec. 19.

With downtown streets closed, it takes on the aura of an old-fashioned Christmas with carolers, jugglers, musicians and plenty of handmade gifts for Santa to pack in his sleigh.

What are your favorite local adventures? Drop me a line, and I’ll share them with readers. You can reach me at ginnyprior@hotmail.com or online at www.ginnyprior.com.

One thought on “Happy Wanderer: For old-fashioned Christmas, head to Gold Country”