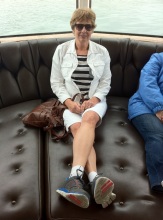 It’s been 20 years since the USS Potomac opened to the public on the Jack London waterfront. A quarter-million people have been aboard this yacht since the summer of 1995. It’s the best history lesson a student could have on the life of our 34th president.

Cruising the San Francisco Bay on Franklin Delano Roosevelt’s “Floating White House” is such a treat. You can sit on the bow where Roosevelt himself relaxed with his closest friends and advisers.

“Think Camp David. It was a way for him to get out of the White House and the humdrum of the East Coast. He’d bring all his buddies on board and go fishing,” says docent John Kaehms.

In the years after FDR’s death, the Potomac was owned by a variety of colorful characters, including Elvis and later — a band of drug smugglers. Kaehms remembers when the Port of Oakland rescued the yacht from being sold as scrap in 1982.

Today, the Potomac plays host to birthday celebrations, anniversaries, weddings and all kinds of events. On Friday night, the yacht will be opened for tours and a dockside concert by Oakland’s own bluegrass band High Country. There’ll be food and drinks available for purchase, and the proceeds will support the Potomac’s educational programs for students.

For more information, go to: http://usspotomac.org. If you’d like to take a virtual trip on the Potomac, check out the NPR podcast that my colleague, Tom Wilmer, produced on our recent San Francsico Bay cruise at http://bit.ly/1OazrQd.

Around town: A group of neighbors is raising money to make the south entrance to Montclair look more welcoming. Ken Ball and Robbie Neely are helping coordinate efforts to clear weeds, beautify the medians and paint an oak tree and butterfly mural on the 500-foot-long concrete wall on the east side of Mountain Boulevard. They’re launching a fundraising campaign next week to raise $10,500. Want to help? See http://montclairvillage.com/gatewaybeautificationproject.

Book Homes: Little Free Libraries are springing up all over the East Bay. Berkeley alone has more than 50 of the whimsical book receptacles with designs like a house with a chimney on Elmwood, a cabin on Hampton and a rooftop succulent garden on Walnut. Not to be outdone, Oakland has a custom-made mini-Eichler on Merriewood and a birdhouse on upper Sunnyhills. Many of them are listed on the Little Free Library website’s map at http://littlefreelibrary.org/ourmap and a detailed, more localized website at https://berkeleylfl.wordpress.com.

Hot flash: And finally … one thing you can say about summer — it doesn’t go quietly. The Old Farmer’s Almanac has Oakland heating up in September, right through the autumnal equinox on Sept. 23.

Fans of fall aren’t exactly thrilled with this “endless summer,” but it does make for good people-watching along Lake Merritt. Sunny days see happy people strolling along the shoreline, martial arts classes twirling and kicking in front of the bandshell and sidewalk cafes full of folks soaking up the social scene. And this past weekend, a ragtag brass band was pumping out a funky version of Meghan Trainor’s “All About That Bass” as I drove by.

Yes, the sights and sounds of summer are pleasant. But come October, the only sound I want to hear is the rat-a-tat tat of the rain as it hits the roof, flows down the gutters and into my new water storage barrels.

Got news? You can reach Ginny Prior by email at ginnyprior@hotmail.com or on the web at www.ginnyprior.com.