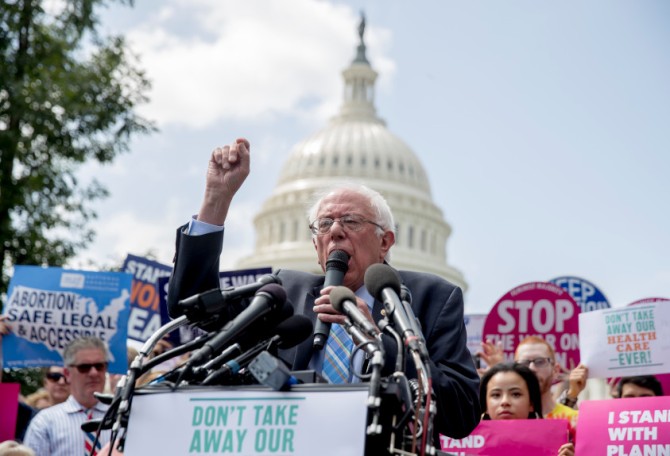 Sen. Bernie Sanders, I-Vt., speaks at a rally of health care advocates, grassroots activists, and others outside the Capitol in Washington, on Sept. 19. Sanders was recently spotted at the Peet’s in Montclair Village in Oakland. (Associated Press)

They say you can tell a lot about a person by their coffee order. So what kind of coffee does Bernie Sanders drink? We learned the answer when he popped into Peet’s on a recent Saturday. The September surprise came just before noon in Montclair and shift leader Dorothy Curry (no relation to Stephen) said he ordered a plain coffee. Yep —- no frills for Bernie — and he even turned down a patron’s generous offer to buy him a cuppa Joe.

Dine around: Meanwhile, had Sanders stayed for supper, he would have found Montclair’s Mountain Boulevard and Antioch Court really heating up in the evenings. From the new restaurant Perle to Flippers, Kakui, and Kouzina, diners are packing these places and taking advantage of the sidewalk seating.

And speaking of hot properties, Daughter Thai on Medau has a Red Rang Challenge that may, singlehandedly, increase sales of Tums. Eat the super spicy meat and noodle dish in 25 minutes and get it free, along with your picture on what I call the wall of “flame” in the bar.

Street talk: La Salle Avenue merchants must be looking over their shoulders, these days. There was yet another car crash outside Hula last month. What is it about this street that seems to confound so many senior drivers? Hula co-owner Andrea Faber says in the latest accident, a car crashed into several vehicles and the driver was stuck in the wreckage for an hour before firefighters took him and his passenger out on stretchers.

Scam alert: Reader Carol Heard wants to alert us to an old scam that seems to be resurfacing in Oakland. There’ve been reports of a man approaching people, sometimes when they’re buying gas on International Boulevard, and claiming he found a ring. In one case, it was in a Macy’s box with a price tag of $2,000 attached. The man offers to sell the ring for a nominal amount of money, saying he’ll pawn it for food if someone doesn’t offer to buy it. Of course, the ring is a fake — not the white gold that the tag proclaims.

Generous hearts: Fruitvale businesses, including the local cocktail lounge “Soons,” are raising money for a neighbor whose family lost their Dominican Republic home in Hurricane Irma. Reader Kurt Meyer says it’s been easy to raise money for Diogenes Almonte-Artiles, (aka Dios) who works at a popular Puerto Rican cafe in the neighborhood. A large tree toppled on his family’s modest home in Puerto Plata and Dios’s sister says there’s no aid for families to rebuild.

Hot ticket: High demand has extended the run, yet again, for Berkeley Rep’s smash hit “Ain’t Too Proud.” The musical story of the biggest R&B crossover group of all times — The Temptations — will run through Nov. 5 at the Roda Theatre. I guarantee you’ll be awestruck by this performance — for the music, the moves and the emotional highs and lows of the Temptations rise to fame in the tumultuous 1960s.This musical outshines even “Jersey Boys” for its raw emotion, storyline and sheer number of songs that make you feel intense joy and sorrow. It’s a textbook example of what makes live theater so powerful.