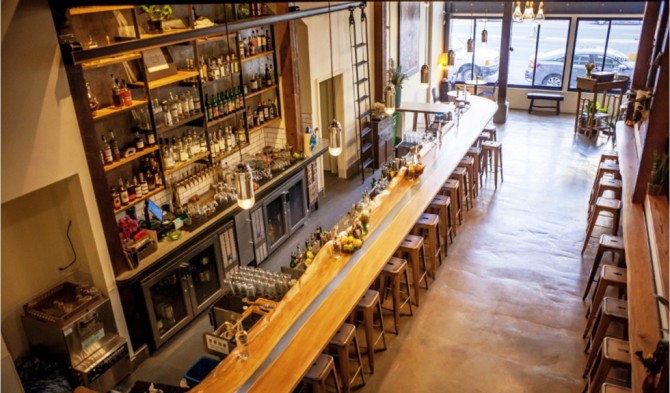 The Copper Spoon’s bar area is seen from above. The new Oakland restaurant is on the site of the former Art’s Crab Shack, the iconic diner that served patrons for decades. – Courtesy Copper Spoon

I ordered this entree the other night at Oakland’s newest restaurant at 4031 Broadway, Copper Spoon (www.copperspoonoakland.com). You may know it as Art’s Crab Shack, the iconic Oakland diner that served patrons for decades. When Carmen Anderson and Vita Simone saw the space was available, they thought the timing was right to take their Sassafras Seagrass food truck cuisine to the next level. Plus redecorating the Crab Shack fed more than just their passion for food.

“We’re avid vintage shoppers,” says Simone, who was hesitant to share any ‘secret spots’ but did say they shop the Oakland Museum’s White Elephant Sale.

The restaurant’s interior I-beams and redwood pillars, high ceiling and natural light created the perfect pallet for the partners, who combined antique furniture accent pieces with wall murals by local artists. The co-owners have brought something else to the table. Anderson uses her degrees in physics and astrophysics to analyze complexities in the restaurant industry and Simone taps into her background in bartending to create specialty cocktails.

Copper Spoon’s management has big plans for the future too. Their lounge space in the back of the restaurant seems perfectly suited for special events including live music and DJs. And their happy hour is already drawing thirsty customers with $5 draft IPA, pilsner, house wine and well spirits. Libation with a lamb burger anyone?

Musical notes: Grateful Dead buff David Gans entertained at Saint Mary’s College last week. Gans isn’t your typical ‘Dead head’ since he didn’t uproot himself to follow the band he’s written about for decades, but his renditions of Dead songs are flawless. Gans brought his guitar and stories and held students spellbound in a specialized January Term class about the groundbreaking Bay Area band.

Montclair muses: Folks sitting in Starbucks see scofflaws all day as fans of the cocoa bean park their protruding vehicles in the red zone, forcing traffic to creep around them. At least an offending wine truck had apropos signage for the infraction. It advertised the brand 19 Crimes with the slogan “live infamously.”

Got news? You can reach Ginny Prior by email at ginnyprior@hotmail.com or on the web at http://www.ginnyprior.com.