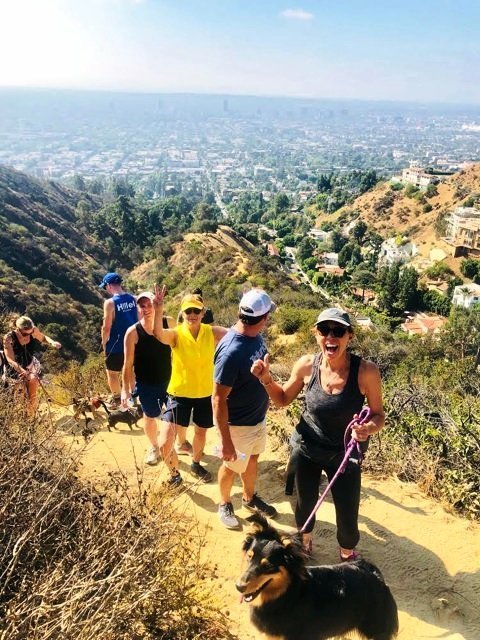 A group of hikers and a dog take a break while trekking above Hollywood in Runyon Canyon, one of the most popular dog destinations in Los Angeles, which in turn is possibly one of the planet’s most pet-friendly places for travelers. (courtesy of Danny Roman)

In Travels with Charley, author John Steinbeck takes his wife’s poodle, Charley, on a soul-searching journey and discovers what many of us know today — that traveling with pets is rewarding. A survey of travelers by TripAdvisor found that 53 percent of us sojourn with snorkies, schnauzers and other pets — unbred and not.

And like Steinbeck, we want to connect with our furry friends in ways that others can only dream of achieving. It’s not enough to play Frisbee. The perfect pet-cation must include a spa treatment for you and your canine companion. There needs to be face time before an adoring public and, of course, access to hiking, shopping, dining and a pet-friendly hotel in order to properly bond.

Enter Los Angeles and — perhaps the most pet-friendly place on the planet — West Third Street. Bordering Beverly Hills and West Hollywood, this walkable neighborhood has more trendy restaurants, chic boutiques and wellness shops per square foot than any destination imaginable. On one end is the Grove, a $100 million shopping center built around the famed Farmers Market in L.A.’s Fairfax district. The centerpiece is a fountain that plays a musical show every hour.

On the other end of West Third Street, there’s the Beverly Center, a fashion destination in its own right. In the blocks in between are businesses that set new standards in pampering you and your pooch. And while Steinbeck and Charley stayed in a camper, they would have had more “creature comforts” had they stayed at The Orlando, West Third Street’s hip, urban boutique hotel.

The Orlando, of course, has it’s own dog mascot. Hendrix tests every dog biscuit and bed for exceptional quality. Trendy, but never pretentious, The Orlando welcomes purebreds and mixed breeds alike — with human companions, of course.

Don’t have a dog? Not a problem. Just down the street is The Vanderpump Dog Foundation, the adoption center and dog boutique founded by famed animal lover Lisa Vanderpump. Here dogs enjoy blueberry facials and pedicures because — it turns out — they love them as much as we do. Imagine what a brush and blowout would have done for Charley’s disposition. He may have opened up even more to Steinbeck, giving him fodder for a sequel.

Once properly pampered, you and your canine companion must see and be seen. A walk along West Third Street will expose you to epic pooch- and people-watching. Stop to have brunch at Toast or dinner at Yardbirds. Enjoy a sweet treat at Magnolia Bakery, taste and blend wines at The Blending Lab and order a custom-made scent at Le Labo Fragrances.

When you’re ready for nature, hike high above Hollywood in Runyon Canyon. One of L.A.’s most popular dog destinations will be near your hotel with 130 acres of paths that soar 1,325 feet above the “Hollywood” sign, Griffith Park and the Pacific coast. Looking down over a sea of humanity, you can be thankful you found your soulmate in the sure-footed friend who gives you slobbering kisses and unconditional love.

April is National Pet Month, and The Orlando Hotel has special packages for you and your dog at theorlando.com. Find out more about West 3rd Street’s more than 100 destination shops and restaurants at west3rdstreet.com. For bike and hike tours of Runyon Canyon and Los Angeles, see bikesandhikesla.com.