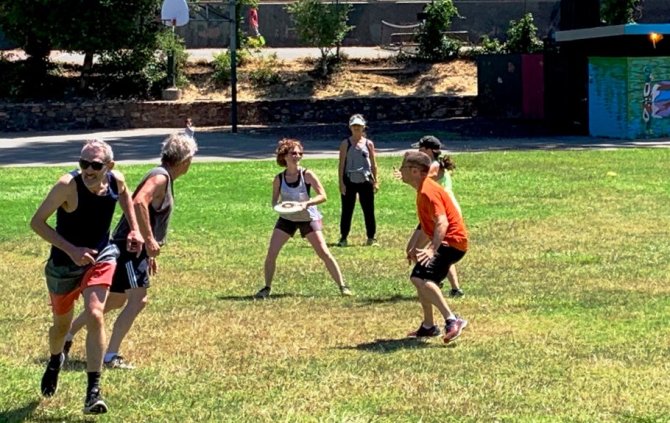 courtesy of Chris Gulli
A group at an Oakland hills park enjoys a recent game of Ultimate Frisbee. There are four pickup games a week in Montclair and Shepherd Canyon parks, and players range in age from 7 to 70, says longtime player Chris Gulli.

Who knew a flying disc could bring so much joy to the hills? Ultimate Frisbee is bringing “kids” of all ages together and the organizers are looking for you. “You don’t even need a Frisbee to come out and play” says longtime player Chris Gulli. “All you need is a willingness to learn the game and have fun.”

There are four pickup games a week in Montclair and Shepherd Canyon parks, and players range in age from 7 to 70, Gulli says. A group of Montclair Elementary School moms started the games about 10 years ago and still plays on Wednesdays and Sundays. A second set of games morphed out of the first — with a different group of parents — mostly dads — playing on Saturdays. (Game days and times are listed at pickupultimate.com.)

Ultimate Frisbee is a bit like soccer, only you’re throwing a disc to your teammates instead of kicking a ball. And, of course, they have to catch it. “If your team drops a pass or the other team intercepts,” says Gulli, “the disc goes to the other team. You score a point when you throw to one of your teammates in your end zone and they catch it.” And the good news for us baby boomers is that Ultimate Frisbee is a noncontact sport, so those hip and knee surgeries shouldn’t hold us back much.

What I like best about these pickup games is how they’re a throwback to simpler times in our technology-driven world. Gulli feels the sense of community it creates.

“People will come up to me and say ‘hi’ in the (Montclair) Village, and I’ll tell my wife, ‘that’s a Frisbee friend.’ ” I think the big thing it does is give people at all athletic skill levels a chance to run around and have fun.”

Around town: Thanks to Crogan’s server Annie Holmgren for the update on 29-year-old bartender Mitchell Peterson. Mitch is recovering from open-heart surgery at California Pacific Medical Center in San Francisco. “A beloved fixture around our little village of Montclair,” Holmgren says her co-worker went into heart failure last month and that it will be many months before he can work again, even as bills mount. “We have started a GoFundMe (page), which has raised a lot of money from generous Crogan’s regulars and friends and family,” says Holmgren, “but he needs a lot more.” The online page is at gofundme.com/go-team-mitch.

Over the hill: And through the woods … to the new brew pub we go. The Canyon Club Brewery (1558 Canyon Road) has opened in Moraga in the long-vacant World Savings building. Billed as “the end of prohibition in Moraga,” the area’s only brewery employs several Saint Mary’s College students who pour six house beers and at least 15 others, including ciders, porters and scotch ale. Food and live music can also be found, but what you won’t find is a boisterous beer garden after 10 p.m. They don’t call Moraga a bedroom community for nothing … .