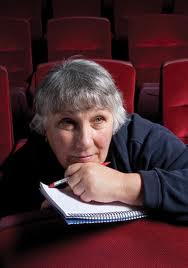 Where: She attends screenings around the Bay Area, including a December screening of the movie Nine at the home of George Lucas. “I drove through pouring rain and hideous weather to Lucas’s Skywalker Ranch to see that movie.”

Why: She got started on a dare, eight years ago. “A group of friends and I formed a women’s group. We challenged each other to be more creative in our lives.” Hardy loved movies and loved to write, and her friends encouraged her to start doing movie reviews.