THERE COMES a time in every girl’s life when she just needs to get away. Men, it’s been said, are the reason.

My getaway started innocently enough — just five gals and me in Montana. “It’s Glacier National Park’s 100th anniversary!” one girlfriend wrote, and we thought it a grand place to visit. We didn’t plan on Mother Nature, who is — after all, a woman — to get snippy with us.

Our rendezvous point was Missoula, known for its mountains, rivers and hippies. I know this because Missoula is home to the University of Montana, the arch rival of my own alma mater, Montana State U. Even back in the ’70s, we knew that Bozeman had cowboys and Missoula had hippies. A cowboy will always trump a guy in a tie dye. That was our motto and I’m sticking to it.

Still, our arrival in Missoula was exciting. I saw three hippies before even leaving the airport and several more shopping in downtown boutiques. I did not see any at The Resort at Paws Up, our overnight address and the home of a new kind of wilderness experience — glamping.

Glamping is glamorous camping, in luxuriously appointed canvas tents “pitched” near scenic rivers and stands of soaring pines. They are spacious like suites and come with amenities like high thread count linens and gourmet meals. Did I mention they come with a butler? Now this is the kind of camping a girl could get use to.

But I digress. This trip was about

girlfriends and independence. We would humor the butler, for his sake, not ours, — and the next day head out to the river. We were going kayaking on the Clark Fork, come hell or high water (or in our case, a little of both). The river was high, what our guides at 10,000 Waves called “juicy,” and we navigated through eddies and currents. One of the kayaks tipped over and a white-water rescue ensued.

I suspect my friend did this on purpose as the guides were what we called “lookers,” but she swears it was just an accident. The ruckus disrupted the fishing ritual of several large birds, including an eagle and an egret. They returned to their nests on the banks, high above our gaggle of giggling women.

Our takeout point on the river was our home that night, the Downtown Missoula Holiday Inn. It couldn’t have been more convenient. We turned in our kayaks and walked with great purpose (wet T-shirts will do that to women) though the lobby and to our rooms. I thought I heard a cat call, but it may have just been a train whistle.

Regardless, we were on a mission to get cleaned up and over to the Red Bird, Missoula’s chic wine bar and restaurant. There was a pot of Champagne fondue with our name on it, not to mention three old-fashioned phone booths in the lobby just waiting to be stuffed.

Having witnessed a phone booth stuffing at Saint Mary’s College in Moraga last summer, I orchestrated the evening event, putting the smallest gal on the bottom (folded in half), and the rest of us stuffed in around her. I noted afterward that we should have done this before the Champagne fondue.

For three solid days, Mother Nature teased us with her stormy temperament.

“We will not let this stop us,” one girlfriend said, as we made plans to kayak on Flathead Lake. We should have “pinkie promised.” Half the girls went shopping in Bigfork (including the one who got dumped in the river), leaving the rest of us to paddle under spitting skies with Glacier Sea Kayak. When we met up for lattes later that day, three of us looked like wet dogs and the others were sporting new jewelry.

Luckily, Glacier National Park was just up the road. The Belton Chalet, where we stayed on night three, had a warm, crackling fire in the lobby and a bottle of wine in each room. The Swiss style lodge was built by the Great Northern Railway in 1910 as the first inn to service the park. We sat by the fire and chatted with guests and played Ping-Pong in the game room.

“I think it’s supposed to stay on the table,” I remarked, as the ball ricocheted off the walls. How did we get so uncoordinated? Could it have been the wine?

Day four saw a mix of morning spritz — for white-water rafting with Glacier Raft Company — and afternoon sunshine for our trail ride. We rode, nose to tail, on the trail used by the park’s earliest visitors a century ago. I could picture the ladies riding side saddle in their frilly dresses with smothering corsets underneath. Looking down at my own outfit, I realized just how far women had come. And then it hit me. I had nothing on under my T-shirt. 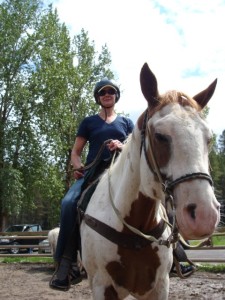 In my haste to get dressed after river rafting, I’d forgotten a key undergarment. Was it my imagination or was everyone suddenly staring at me? “Everyone is staring at you,” my girlfriends chimed in — and they threw me a jacket to wear. Somehow I knew they wouldn’t let this go.

For the rest of the trip, frilly underthings appeared in the most unlikely places — like the mouth of a stuffed Grizzly at The Lodge at Whitefish Lake. And of course, we got a group shot with that bear and the underwear.

It was a fitting theme for a great girlfriend getaway to Glacier Country, Mont. And we earned a new nickname, to boot. We’re now known as “the sisterhood of the traveling bra.”

One thought on “HAPPY WANDERER: The tale of the traveling bra”