Driving in the hills is like driving in a wildlife park. You never know what’s going to come out of the brush. The other day I almost bought the farm when a fawn darted in front of my motor scooter. He was so small and spotted — he was barely visible as I came around a blind curve on Colton. It’s the time of year when young wildlife is everywhere — learning how to survive in their home in the hills.

“Go really slow and cut these animals some slack,” says reader Martha Bauman, who saw a mother and baby deer darting in and out of traffic on Broadway Terrace the other day. It was 5 o’clock rush hour and people were trying to get home, making it a dangerous time for an animal to cross Broadway Terrace.

“The mother seemed really confused,” Bauman says, “and the baby’s hoof actually hit the back tire of a car as she scrambled up the hill.”

For our sake and the sake of the animals — please drive with caution. 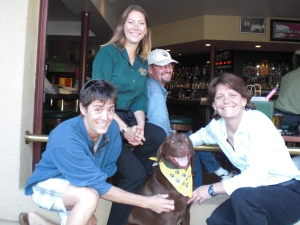 AROUND TOWN: On the subject of animals, I caught up with Montclair’s pet mayor, Murphy, recently. Newly-elected and eager to please, Murphy says he’ll reach across the aisle to whoever will hand him a biscuit. Look for new fire hydrants in the Village (what do you expect from a chocolate Lab?) and more water bowls outside shops — all as part of his plan for the first year in office.

Meanwhile, Yogafina is the hot new property in Montclair, dishing out frozen yogurt as fast as the company can make it. But from what readers tell me, they could use an extra employee to hand out free samples. There’s something about fat-free dessert that’s just “… irresistible.

TOILET TROUBLES: Montclair Park is still short on potties, thanks to ongoing vandalism that is too graphic to even describe in this column. The Rec Center’s Mark Zinns says the outdoor bathrooms next to the basketball court will remain closed on weekdays (when indoor bathrooms are open), despite the summer crush of day campers and other visitors.

“Public Works has to remove gravel and other foreign objects from the toilets on a weekly basis,” he says, adding the debris damages the pump that pushes the sewage from the bathroom up to street level.

Zinns says he’s open to other ideas about how to handle the situation, given the city’s ongoing money problems.

CAT PLEA: Neighbors are still trying to catch, fix and find homes for the felines in a feral cat colony outside Montera Middle School. But until that can be done, they need more volunteers to feed the wild kitties.

“One feeder comes all the way from Berkeley four days a week and another from San Francisco,” says reader Helene (who doesn’t want to give her last name).

If you can help care for the cats until they are caught, contact her at hrr44@earthlink.net.