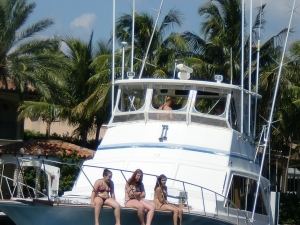 America’s beautiful people are alive and well and living in Fort Lauderdale. One visit to this yachting mecca in autumn and you see that gold runs through the veins of their waterways.

An incredible spectacle of money amasses each year at the end of October. It’s the Fort Lauderdale International Boat Show, where the most opulent yachts in the world are on display.

“One-tenth of the world’s wealth is represented here,” says Stephen Waters, who. quite appropriately, works as a water taxi guide. For about the cost of a bolt on one of those 100-foot yachts, he takes you on a merry little party barge along some of the 300 miles of inland waterways that give Fort Lauderdale the nickname “Venice of America.” 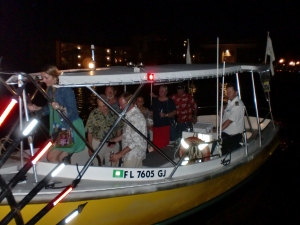 All along the shores of these watery fingers are homes belonging to some of the country’s most interesting entrepreneurs. There’s the mansion owned by the Pillsburys, with its 10-car garage and the pool on the roof.

There’s the home owned by Tom Bodett of Motel 6 fame, and the house that Dave Thomas built for his redheaded daughter, Wendy (Wendy’s Old Fashioned Hamburgers).

“The Kohl’s Department store family lives here. The founder of the Sunglass Hut lives there,” explains Waters, as he dishes out gossip on everything from who pays the most property taxes to which movie stars built homes along the waterways.

Like neighborhood streets lined with too many cars, the canals are dotted with yachts. Some of them are so big, they dwarf their docks and cast ominous shadows across the water. You don’t even want to know what goes on behind tinted glass in those fiberglass fortresses.

But yachts are just one part of the story of a Florida city that’s a relative newcomer to the East Coast. Just 100 years old in 2011, Fort Lauderdale was a swamp when it was first discovered by opportunists who saw the potential for one of the area’s last coastal frontiers.

The early pioneers had to brave stifling heat and blood thirsty creatures — and those were just the mosquitoes. The settlers had to clear vast stands of gangly trees and brush to be able to build their homes and the town’s first schoolhouse. Some of those buildings still stand today and are favorite destinations for tourists, schoolchildren and ghost hunters. Historian Marlene Schotanus gives “spirited” tours of the town’s oldest standing structure, the Stranahan House, which has had numerous unexplained incidents.

What drew early settlers to Fort Lauderdale were the sun and the surf and the 23 miles of golden sand beaches. Sun worshipers continue to flock here today, but not all of them are wearing bikinis. Endangered sea turtles waddle on shore to lay their eggs in holes in the sand. From March to October, the loggerheads and leatherbacks stake out their nesting sites under cover of darkness. Guided moonlight turtle walks are only $5 — the bargain of the century for anyone who thought Costa Rica was the closest place to witness this kind of reproductive activity.

And while the turtles are known for their night life, the humans are the ones who really know how to party in this town. Once hailed as the epicenter for students on spring break, Fort Lauderdale’s 20-somethings and hipsters still spill out of clubs that line commercial districts. Just as popular are its restaurants, offering fresh fish and seasonal dishes that celebrate the abundance of a state where most days are kissed with warm sunshine.

It’s this combination of sun and fun that makes Fort Lauderdale so attractive for the rich and the folks who just want to live richly.