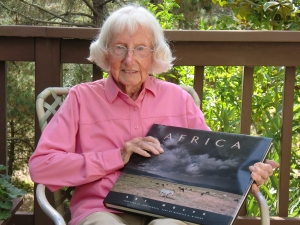 When Elfie Larkin was little, she had weak lungs. Today, at 98, she’s outlived everyone she knows. What’s this Oakland woman’s secret to long life and happiness? Her spirit tells the story.

As she shows me around her neatly kept home on its tree-lined and freshly-mowed lot, she talks about what keeps her going.  Coffee in the morning (“I don’t know how people get along without coffee,” she says) and a gourmet dinner with a glass of red wine every night.  “I really treat myself,” she says, “with things like filet mignon and chicken.”

Larkin, it seems, has always known what she wanted out of life. She was one of the earliest docents at the Oakland Zoo, and remarkably, she’s still one today. “I joined in 1978,” she remembers, “when I was teaching first grade at John Swett Elementary School.” Larkin would spend the whole day with her class at the zoo and when the docent program began, she signed up.

“I had such wonderful teachers at the zoo,” says Larkin. She still remembers her bird teacher – a woman named Betty Wren. Larkin took a year’s worth of docent training and started giving tours to young school children, who asked some of the funniest questions. “When we came to the Flamingos,” she recalls, “I said ‘aren’t they pretty? They eat carrots and shrimp and things that make them pink.’” One little boy thought hard about this and then asked, “Do you think if I eat carrots that I will be pink?”

Around Larkin’s home are signs of her interest in animals. There are African Masks on the wall and an elephant sculpture on the coffee table.  She has traveled the world and her memories are colorful and clear.

In Australia, she recalls that a Koala bear was riding on top of a German Shepherd.  “And they had the most colorful parrots,” she says. “They would land on your shoulders and they were all over your head when you’d feed them. I always said to my husband, Paul, ‘you feed the animals – I’ll take the pictures.’”

These days, Larkin stays closer to home, but still gets to the Oakland Zoo for occasional meetings and events.  Her years of experience make her a valuable asset to the docent program today.

She’s also in demand at Coast Guard events, where she’s asked to talk about her pioneering years of service as a ship-board radio operator during World War Two. “I’ll never forget what they told me,” she says of a recent luncheon on Coast Guard Island. “You are responsible for all the women being in the Coast Guard today, they said.” She says 70 of the 180 crew members in the audience were women.

It’s stories like these that keep Larkin young and for this she’s eternally grateful. “God gave me a wonderful memory,” she says. “If you wonder what I’m doing sometimes, I’m sitting here remembering…reliving the experiences.

6 thoughts on “Oakland senior still active at zoo at 98”