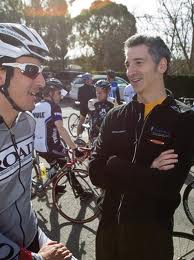 What: He’s a husband, father and an avid cyclist who, along with his friend and business partner Thierry Attias, owns one of the world’s top professional cycling teams – UnitedHealthcare Pro Cycling Team.

When: Raifman and Attias formed the team and Momentum Sports Group LLC during a friendship which began 15 years ago when they met in Attias’ Oakland bike shop, Cycle Sports. “He ran the best shop in the area and I went in to get advice on a bike. Working in the corporate world, I knew that putting in 60-hour work weeks wasn’t good for my own personal health. We got to know each other and started going on bike rides.” The idea for the team came after meeting, one day, with a group of pro cyclists in Attias’ living room.

Where: United Healthcare Pro Cycling Team is competing on four continents in the 2011 season, which began in January. The largest cycling event in America is the Amgen Tour of California May 15–22, a Tour de France–style cycling road race with stages from South Lake Tahoe to Thousand Oaks.

Why:   Raifman enjoys the thrill of starting an enterprise from the ground up and competing for the ultimate prize — racing at the highest levels of the sport. UnitedHealthcare Pro Cycling Team finished the 2010 season with 35 stage wins including fifth place at the Tour of California. “Tour of California is the premier race in the U.S. today. We ultimately want to win. It’s a great race for our sponsors and team to showcase.”

How:  It’s a hands-on operation. “The truth be told, in the first year Thierry and I were washing water bottles when there wasn’t anyone around to help.” These days, they still play a large role in motivating the athletes and the sponsors but there are plenty of people to help. “Today we have 34 people in our organization and expect to double in size over the next several years.”