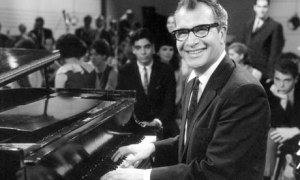 It was the first jazz standard in the country to sell a million records. Dave Brubeck’s syncopated 5/4-time hit “Take Five” was being played on jukeboxes around the country in the 1950s, and his band, The Dave Brubeck Quartet, was on the road frequently. But when Brubeck came home, it was to his house in the hills of Montclair.

The jazz legend and his wife, Iola, lived in a Mid-century modern, built by architect and fan Dave Thorne. It’s where the couple started their family and where the Mills College-trained musician and his saxophonist, Paul Desmond, worked on much of their groundbreaking music before the Brubecks moved to Connecticut in 1960.

Brubeck passed away Dec. 5, a day short of his 92nd birthday. He was playing music right up until the end. The son of a cattle rancher, Brubeck learned piano from his mother. By the time he got to Mills College, he was writing jazz and studying under French composer Darius Milhaud, who taught at the school.

At his Montclair home on Heartwood Drive near Colton, Brubeck often jammed with some of the biggest names in the business. You can imagine the joyful noise that the neighbors must have heard, when musicians such as trumpeter Miles Davis would come calling.

TV Guide: Speaking of famous hills homes, the producers of the TV show “House Hunters” still haven’t scheduled an airdate for the show featuring several Montclair properties. Apparently, you can check the airdates yourself at this link: http://www.hgtv.com/hgtv/episode_archive/0,1000237,HGTV_32663_82,00.html.

Fight night: Talk about being thrust in the ring — we had 10 TVs in front of us at Ricky’s last Saturday — almost all of them showing the Marquez/Pacquiao fight. It’s easy to see why this San Leandro favorite is the No. 2 sports bar in the nation. Ricky Ricardo (yes, that’s his real name) and his wife, Tina, run this place like a well-oiled machine. You name the game and they’ll have it on one of their 100-plus TVs. And you never know who might be watching it with you. Ricky’s is a favorite for big time athletes as well as armchair quarterbacks.

Cat’s meow: Here’s the perfect gift for that animal lover on your list — a full-color calendar with pinups of bunnies, puppies and pussycats. Every year, a small team of volunteers from Oakland Animal Services snaps pictures of its most photogenic charges. Then, they write heartwarming stories that help tell the tale of each animal’s life. January’s pinup is Zeke from the Laurel District. He came into the shelter with three strikes against him — he was black-and-white (not a popular choice), skittish and had an eye injury. Today, he’s an affectionate friend to the man who adopted him. Check out the calendar at http://oaklandanimalservices.org/calendar.